Skip to content
The lockdown routine – Is it really that different?!

The lockdown routine – Is it really that different?!

Cities that not so long ago were glowing in life are now turned into “urban deserts”. It seems like humanity is halted, while nature is taking over. But as we know it, this is not an unprecedented case in history, and as much as an apocalyptic scenario as it might look like, it is within mankind DNA to adapt, improvise and overcome difficulties. It was this ability of human nature that, when the world most needed it, has rendered some ground-breaking discoveries that have shaped our civilization as we know it today.

Despite the circumstances, one way or another, researchers are always thinking about work, either in the office or at home, in the lab or even while on holiday somewhere in the mountains or seaside. However, it is weird to deliver a presentation from the bedroom and the endless online meetings do not fully replace those casual conversations with colleagues during a coffee break that often spark new ideas. Ironically, at least for us as Civil Engineers, nature ensures to bring some motivation even while in quarantine. On March 22nd, 2020, as the world was getting into lockdown due to what it is a global pandemic, Croatia was rocked form an Earthquake that caused severe damages, many injuries and 2 casualties. Once again, this was a quick reminder, that even the “safest” places in some context are still vulnerable to other kinds of natural hazards. We here at INSPIRE, are devoted to the development of concepts for the protection of structures and infrastructure from ground-induced hazards.

As an early stage researcher engaged in the framework of INSPIRE program, my research activity is dedicated to the development of innovative seismic isolation bearings using the concepts of metamaterials. These materials, whose name derived from the Greek word meta – which means beyond and the Latin word materia – which means matter, are engineered materials that exhibit remarkable properties that cannot be found in nature. Their basic principle relies on periodically repeating certain geometrical shapes that when composed together form materials with unprecedented attributes. Consequently, their behaviour is governed by their structure: shape, size, orientation and arrangement rather than the properties of the base materials used to manufacture it. These periodic structures can manipulate different wave phenomena, provided that the size of their repetitive unit is considerably less compared to the wavelength of the phenomenon it is supposed to manipulate. In seismic engineering, there have been several attempts to employ these concepts in cloaking or isolation devices. The latter mainly envisages a system comprised of layers of metamaterial type structure between stiffening plates. 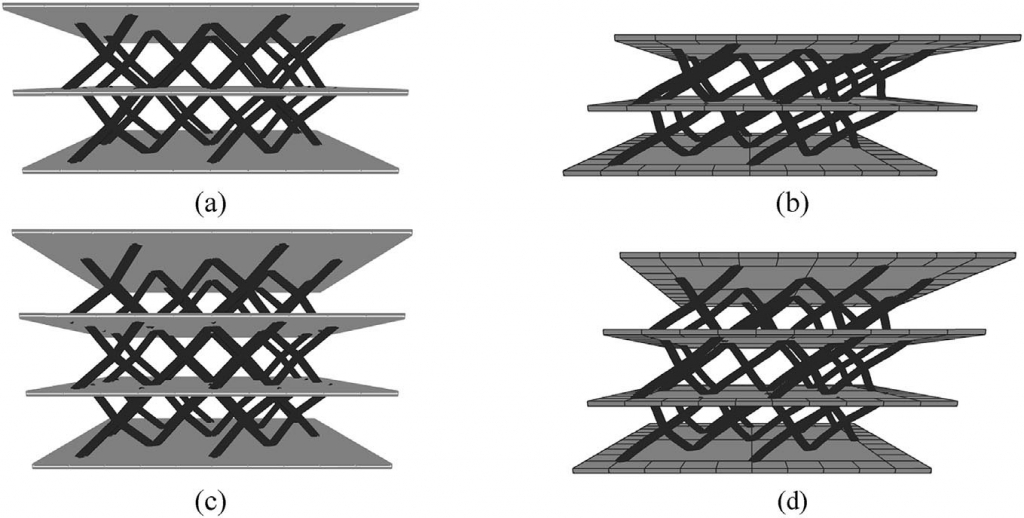 Our goal as engineers is to develop a system that is both efficient and simple. But what would take for a metamaterials-based isolator to comply with these requirements?! To answer that question, we must look to the current technology of seismic isolation and its need for further development. Even though nowadays technology offers a variety of systems, it still struggles with the ability to activate them for low seismic events, which eventually are more frequent. Some previously conducted research (Fraternali F., et al., 2015; Amendola A., et al., 2017; etc.) suggests that layers of pentamodes between stiffening plates offer a good ratio of bulk to shear moduli, bearing a vast vertical force while providing some great horizontal flexibility as the horizontal force emerges from zero. However, a better performance would require a system that remains rigid until a certain threshold and after achieving this critical force, provides horizontal flexibility until it finally goes to lockage, behaving like a “stopper”. But, a fully effective system must also bear severe ground motions. Moreover, the theory of seismic isolation reminds us that the larger the ground motion “becomes”, the stiffer the isolation system must behave. Especially in areas with high seismic hazard, the same isolation device should have the ability to activate and provide horizontal flexibility for frequent low seismic events, and in case of an infrequent severe ground motion, it must be able to accommodate more horizontal displacement and dissipate a considerable amount of energy. The key to a sustainable solution might rely on the usage of the post buckling behaviour of the unit cell incorporated into the periodic device. Post buckling behaviour can be tuned so that the overall performance of the system can fulfil the needs of the designer.

As for the simplicity, this is related to two other key aspects in engineering: firstly, understanding of the state of the art, and secondly means and costs for mass production of the device. Even with the existing techniques of seismic isolation, many designers struggle to understand the concept and therefore they do not develop the necessary confidence to apply the seismic isolation approach in practice. Having less variables to play with, fewer components affecting the behaviour of the system (like a simple unit in a periodic system) can facilitate the design procedure and make designers easily develop a clear understanding on the potential of the system. Concerning the costs and production of the device, it is envisaged that additive manufacturing techniques will be employed in the production of such periodic structures.

Overall, it is clear that within the metamaterial concepts lies a great potential to develop isolation devices that can bear more vertical load, can activate for low seismic actions but also can be tuned to be able to dissipate and withstand severe ground motion excitations, while maintaining a simple design and manufacturing procedure employing 3D printing techniques.