Motivation in times of crisis

It has been approximately two months since I have started working from home due to the outbreak of Corona virus in Europe. Being physically at the university and conducting research there, is objectively an important source of inspiration during my time as a doctoral candidate, which cannot be substituted by any home office concept. Consequently, adapting to this new, unusual situation has been quite demanding. On the other hand, this is exactly one of the most valuable abilities of a scientist: finding efficient alternatives, when the conventional solutions are insufficient. 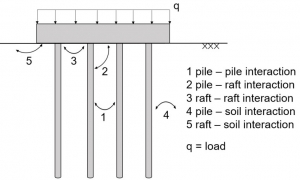 Fig 1. Soil – structure interaction in case of a piled raft

Since I am currently using finite-element programs in order to investigate the problem of dynamic excitation of piled raft foundations, transferring my work at home was a relatively smooth procedure, which involved deploying remote control applications that minimized any inconveniencies. Restricted to my apartment, I decided to see this as an opportunity to gain insight into my topic as much as possible. The piled raft is a composite foundation type that consists of three elements: piles, raft and soil, with the interaction between them increasing complexity, as illustrated in Fig. 1. In this direction, I have been performing numerical analyses with respect to soil – structure interaction, approaching, firstly, static aspects of the basic components of the problem. Indicatively, a model of a single pile analysed with the finite-element software Abaqus is depicted in Fig. 2. Comprehending the mechanics of such a case under simplified assumptions constitutes a prerequisite before moving on to complicated conditions. 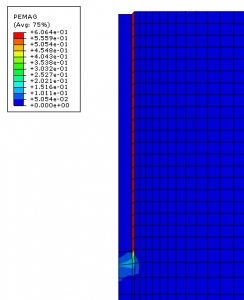 The direct exchange of opinions and experiences regarding scientific issues that takes place at the university is a significant aspect that strongly contributes to a young scientist’s way of thinking. The everyday face-to-face contact with my professor and colleagues has turned now into video call meetings and frequent exchange of e-mails. Additionally, there is the need to encounter challenges that arise from the organisation of online lectures and exams under these special conditions. At the same time, networking possibilities in the frame of conferences seem to be quite uncertain this year, since such events that take place until the end of summer have been banned, as part of the measures taken by the government.

At the moment that I am writing this text, in Germany we are slowly making steps towards normality. Personally, I am looking forward to returning to the university, being able to work again in my office and to enjoy our beautiful campus (Fig. 3)! For me this period has been proven ideal not only because it was a chance for an overview of my research so far, but also for setting milestones regarding the future. It is astonishing how motivated one can become after this procedure! Nevertheless, I truly hope that we will not see ourselves in a lockdown again, and with the power of science this will be possible. After all, the most important lesson that this situation taught us is actually a reminder that scientific research is and will always be of vital importance in our lives.