Nowadays ground-borne vibration and noise exposure to the residents is much higher than in ancient times. The ground-borne effects can be a serious concern for nearby neighbourhoods of a transit system route such as rail traffic, that reaches them as depicted in Figure 1. 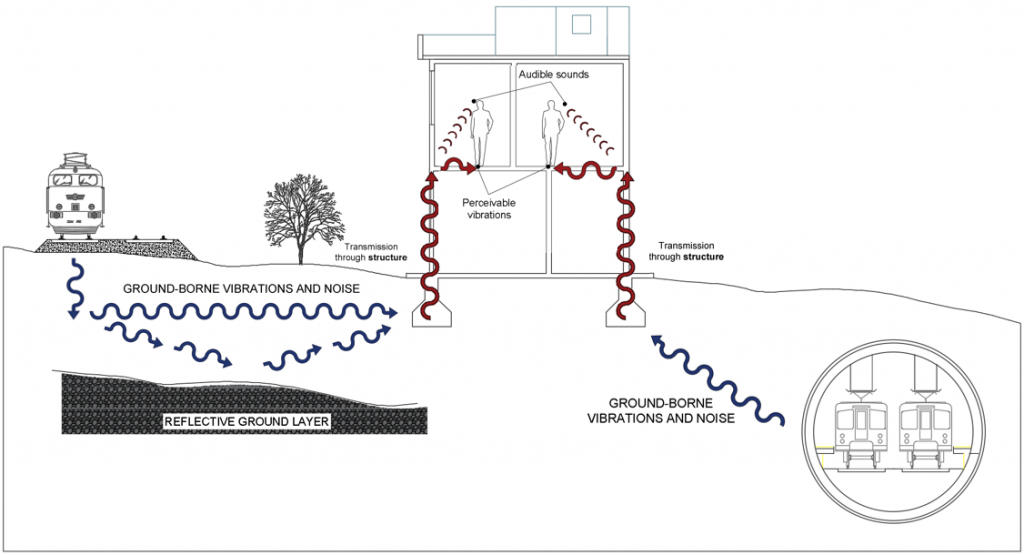 These negative effects have been to a certain extent a limitation for the development of railways, especially in urban areas where significant levels of vibration to which residents in proximity to the lines are subjected. To suppress and/or reduce them, different mitigation measures have been tested in the past years. The mitigation systems can be applied in all three parts of the railway system, on the vehicle, on the track and the transmission path, the principal mitigation measures are reported in Table 1.

Due to the nature of the problem and its complexity, it is not straight forward to predict the propagation and the intensity of the ground-borne effects. Therefore, the different mitigation measures available in the literature can be implemented, through the intrinsic characteristics of the materials involved. In this direction, the use of seismic metamaterial can offer a high improvement to attenuate the vibration coming from rail traffic.

Therefore, the ESR will analyse a variety of non-linear physical concepts to be implemented in the railway network to ensure novel mitigation solutions of neighbour structures. The main challenge for the ESR is to develop comprehensive models of vehicle/track/soil subsystem, including meta-material behaviour. This approach offers a way to evaluate, calibrate and adapt the metamaterial properties to fulfil the expected requirement in terms of vibration isolation.

As an example, the tram T2000 circulating in Brussels is considered (see Figure 2), modelled with a complete vehicle/track/soil based on the two-step approach (presented by Kouroussis et al. 2012). In particular, the dynamics of the vehicle-track subsystem is simulated by means of a multibody vehicle model moving at speed v0=60 km/h on a flexible track. Whereas, the soil is represented by the half-sphere made up of classical finite elements with appropriate boundary conditions (infinite elements coupled to viscous boundary). Promising are the results obtained in terms of acceleration by inserting a seismic metamaterial barrier in the transmission path (see Figure 3). In particular, a group of 4×4 concrete piles array is introduced in the soil FE model.

Figure 3. Seismic meta-material in the transmission path: (a) geometrical configuration; (b) acceleration at 18m with a velocity of 60 km/h.

The results here reported are part of the work that will be presented at the ICSV27 2020, and ICONHIC2022.

Working from Home: Disaster or Opportunity?