Kyriakos (ESR01) is working on vibration mitigation devices, exploring the effect of nonlinearity in metamaterial lattices, and their corresponding filtering properties. To evaluate the capabilities of an investigated design, he has conducted a series of experimental tests in the laboratory of ETH Zürich.

The key property of this metamaterial device lies in the form of nonlinearity, which additionally leads to negative stiffness phenomena. Kyriakos has studied the advantages of incorporating geometrically nonlinear unit cells on the filtering properties of the lattice. The dispersion curves of the infinite lattice were calculated analytically revealing the frequencies at which the configuration is able to mitigate vibration. To incorporate such a design into practice and study its actual properties, a scaled proof of concept system was created.

A finite lattice of 3 unit cells was assembled using LEGO components, as shown in Figure 1, demonstrating the simple construction process needed for such a nonlinear device. The created cells were able to exhibit geometrical nonlinearity under large displacements, resulting in an interesting behavior. Two types of unit cells (A and B) were studied, varying both in stiffness and geometry, where A was overall much more flexible than B. The device was attached to a primary structure at one end and the effects on its dynamic response were monitored. Linear guides were added to ensure the alignment of all components. The system was mounted to a shaker providing a 1D input excitation in the horizontal direction and the monitoring of the individual elements was performed via uniaxial accelerometers. 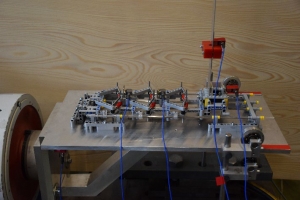 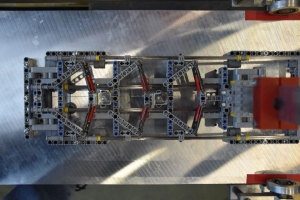 T he reduction in vibrations was evaluated on the primary system by studying the acceleration signal for various frequencies, thus constructing the frequency response curve, and compare it to the fixed base case. While this is a unique curve for linear systems, including the fixed base configuration, it becomes amplitude depended for nonlinear systems. Therefore, the nonlinear device was tested under different excitation amplitudes. Figure 2 shows the acceleration amplitude of the primary mass, for varying frequencies and excitation amplitudes, in contrast to the fixed base scenario. It is observed that reduction of accelerations is achieved for a wide frequency range and crucially around the resonance of the protected mass. The amplitude dependence of the nonlinear system is evaluated, indicating higher reduction ratio for larger excitation amplitudes. In the protected cases, a peak around 9 Hz was evident, which originated form a resonance side effect of the lattice’s supporting structure, which was not related to the dynamic properties of the device, however could not be avoided in the current setup. Unit cell type A was able to reduce the acceleration of the response on the system more efficiently than type B, while both configurations successfully attenuated vibrations. 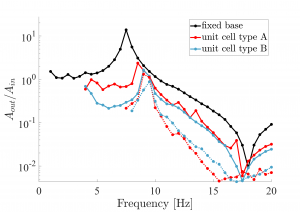 I n conclusion, a broad study on a geometrically nonlinear device that results to negative stiffness phenomena, has been performed. ESR01 has conducted physical tests that demonstrate practically the effectiveness of the device for vibration mitigation applications in the lower frequency range. As a following step of this work, Kyriakos is attempting to integrate such a design into actual structural applications and investigate its effectiveness against seismic excitation. Preliminary finite element analyses indicate the potential of the system for seismic protection and retrofitting of existing structures.

C. Fuggini - ESR11 The security and resilience of Europe’s critical gas infrastructure against natural hazards and physical threats, depend on new resilience concepts and investments in innovation [..]

ESR07 - ESR15 Antonis Mantakas (ESR07) is working in collaboration with Moris Kalderon (ESR15) in the development of a simple dynamic directional amplifier (DDA) [..]