Skip to content
A dissemination and training trip to US

A dissemination and training trip to US

Seismic resonant metamaterials have the potential to be used as an effective method for earthquake protection of structures against the most hazardous, vertically propagating shear waves (SH). By properly adjusting their natural frequency to be close to the natural frequency of the building, their out-of-phase oscillation with respect to the surrounding soil is achieved for excitation frequencies close to the resonant one of the building. Thus, the soil response is reduced as does, consequently, the response of the building.

Last year, ESR5 developed a simplified 2D numerical model to parametrically study the influence of seismic resonant metamaterials on an existing structure modelled as a Single-Degree-of-Freedom (SDOF) system. The principal protective mechanisms were identified and the contribution of each parameter was thoroughly investigated. Find out more details on how resonant metamaterials can be used as an earthquake protection method in a recently submitted paper (under review) here: https://doi.org/10.31224/2203

A more realistic 3D model of a reinforced concrete moment-frame building was later developed to demonstrate the effectiveness of resonant metamaterials on a realistic case study. As shown in Fig. 1, the plastic energy dissipation that is accumulated in the beams and columns of the building is reduced by 46% when metamaterials are considered. Part of this work has been submitted at the 3rd European Conference on Earthquake Engineering & Seismology, which will take place in Bucharest in September 4-9, 2022. 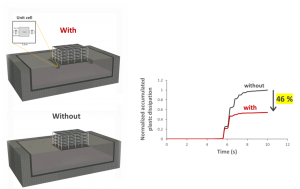 Fig. 1 – Comparison of the protected (“with”) and the unprotected (“without”) building excited by the Ormsby wavelet (frequency content from 0.5 to 10 Hz) using the Domain Reduction Method (DRM). The effect of metamaterials on building response in terms of accumulated plastic energy dissipation in the beam and column elements.

During his 5-month secondment at UC Davis (September, 2021 – January, 2022), ESR5 had the chance to further develop his numerical modelling skills, as he was working closely with Prof. Jeremic and his group, who have developed the Real-ESSI Simulator—the finite element software that ESR5 uses for his models. In addition, ESR5 had the chance to perform a number of seminars (5 in total) on seismic resonant metamaterials at some of the most renowned universities in California and, consequently, interact with researchers from diverse scientific backgrounds. Starting from South California, the first seminar was given at UCLA for Prof. Taciroglou and his group. UC San Diego followed (hosted by Prof. Conte), where ESR5 had also the opportunity to visit the newly upgraded 6-DOF Large High Performance Outdoor Shake Table (LHPOST6), attend the relevant workshop, and learn about its unique features and capabilities. The next stop was at Caltech, where he met Prof. Chiara Daraio and her group. After a really exciting presentation that triggered many questions by the audience (Fig. 2), ESR5 was given a short—yet extremely interesting—tour of the lab facilities, where a great variety of experiments were taking place; from mechanical metamaterials to biology and mechanics field. The fourth seminar was given at UC Berkeley, and was attended by the EERI Berkeley Student Chapter, Prof. Konstantinidis, and his group. Finally, the last seminar took place at UC Davis as part of the weekly seminars that are organized by the Geotechnical Graduate Student Society (GGSS). Thanks to these unique “hands-on” experiences, ESR5 could further develop his presentation skills, but—most importantly—he interacted with other researchers, met new people, and thus, extended his network in the field of earthquake engineering and mechanical metamaterials for potential future collaborations.

Fig. 2 – A photo during the seminar at Caltech in front of Prof. Daraio and her group.